Anyone who’s ever played a game of tennis Downriver and especially on Grosse Ile is almost guaranteed to know John Shade. In fact, for numerous islanders, his name is synonymous with the sport. 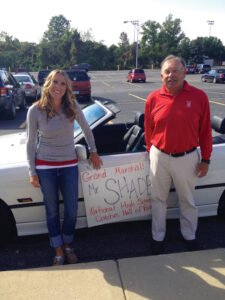 “When you think of tennis on the island, you think of John Shade. He’s Mr. Tennis,” says Grosse Ile resident Anna Kaiser.

After playing tennis for three years at Central Michigan University and graduating with a degree in physical education, Shade accepted a teaching position at Grosse Ile High School in 1972. At the time, tennis was becoming incredibly popular on the island, but no program yet existed at the school. To rectify this, Shade established a boy’s and a girl’s tennis club, both of which he voluntarily coached until the board of education approved them, establishing Shade as the first coach of the Red Devils tennis program.

Shade often competed in local tournaments with doubles partner Dorothy Kaiser. Herself a passionate tennis player, Mrs. Kaiser says Shade was a quiet but honest man who she could always rely on to help her recruit for Tennis and Crumpets tournaments, which raised money for the Children’s Hospital in Detroit. “I think he’s wonderful, and I’m still a good friend of John and his wife Lee Ann,” says Mrs. Kaiser. Shade also coached Mrs. Kaiser’s son, Dean, then Dean’s daughter Anna. 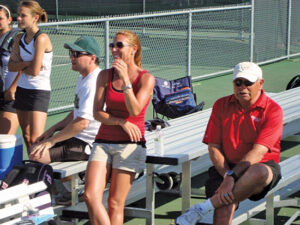 It didn’t take long for the Red Devils to start winning. In 2005 and 2007, the boy’s tennis team won state championships, then in 2014 so did the girls’. In the four decades Shade coached the teams, he has led them to countless regional and tournament victories, with the Red Devils playing in the state finals almost every year, as well as over 50 Huron League championships between both the boy’s and girl’s teams.

Since joining the community, Shade has become ingrained in the hearts and memories of folks near and far, many of which can’t sing his praises highly enough. Mike Rose, who Shade coached early in his tenure at GIHS, says that “I got to play for him for three years, and he encouraged me during every nook and turn in the road.” Rose added that Shade inspired him to become a tennis coach himself. “John has always been a huge ambassador and the greatest supporter, I’ve got nothing but love for him,” says Rose.

“I met John when I was in the third grade, and he was the gym teacher at Park Lane Elementary,” says Charles Kimm, who was not only coached by Shade in high school but also worked with him at the recreational department as well as the Grosse Ile Country Club.

“I worked closely with him as a player, as an employee, and we became very good friends over the years… he’s just a class act.”

For Shade, everyone was welcome on the tennis court regardless of gender, age, or ability. His passion for inspiring a love of the game transcended even some of the most impossible odds, as it did for Frank “Scooter” DeMare. DeMare, who was born with a form of dwarfism called Nievergelts Mesomelic Dysplasia that caused a shortening of the limbs, making his forearms essentially non-existent, and forced his right foot to be amputated when he was five, says he never imagined he’d be able to play a game of tennis let alone hold a racquet. Shade, who could see a desire to learn in DeMare, took him under his wing and spent countless hours on the court, instilling a passion for the sport into him.

Through diligence, DeMare was able to play on the varsity team as a freshman and win four consecutive league titles, and a couple of regional championships. DeMare was also a state quarterfinalist, played #1 singles his senior year and graduated with the most career singles wins for boys ever. His success let to him receiving a tennis scholarship to play for The University of Indianapolis. DeMare eventually returned to coach alongside Shade at the Grosse Ile Tennis Center as well as the high school and helped lead the school to its first ever State Championship.

When I was born, my parents were told I would never walk or lead a productive life. John never let that be an excuse.

John spent countless hours with me from the time I was very young and believed in me the entire time. He instilled a love for the game that is like no other. Tennis was the gateway that opened so many doors to me personally and professionally.

Of all the time that he spent with me, there was no better feeling than capturing GIHS first ever state title in tennis together. This is something that can never be taken away, and we will always be a part of history.

I will forever be grateful for all that John taught me growing up about the game of tennis and for instilling a love for such a wonderful sport.

DeMare’s sentiments ring true for so many of the young people who came in contact with Shade. “To find someone so passionate about his profession and wants to share his knowledge reveals the mental discipline you can aspire to,” says Alex Moyer, another player for whom Shade provided their first work experience at the Grosse Ile Country Club.

It’s no surprise that a love of the game rubbed off on Shade’s daughter, Audrey. Playing and coaching alongside her father, Audrey has learned from one of the best. After playing in high school and at Cleveland State University, where she earned a tennis scholarship, Audrey eventually returned to the island and has taken up her father’s mantle with the same drive, dedication, and commitment to the community, the sport, and its players. “It’s nice to know that I can carry on his legacy,” says Audrey, “and the fact that I’m so involved in the community, I know all the kids, so I can keep growing the tennis culture and get people loving tennis, which is the main goal…the more people playing tennis, the better it is.”

Tammy Carney, a good friend of both John and Audrey Shade, says that she got to know the family when she started working with them at the pro shop. “One thing I just can’t say enough about him is his dedication to the community. John has a commitment that’s beyond anything I’ve ever seen,” says Carney.

Not many people can say they’ve done exactly what they love to do, but it’s clear that Shade did just that. And while hard work, time, and desire pay off, anyone who’s ever played a game with or for John Shade can attest to the fact that true love and appreciation is what builds the sort of legacy he has built. And his is a legacy that will last for generations.