During these uncertain times, there is still a constant when it comes to quality cleaning. 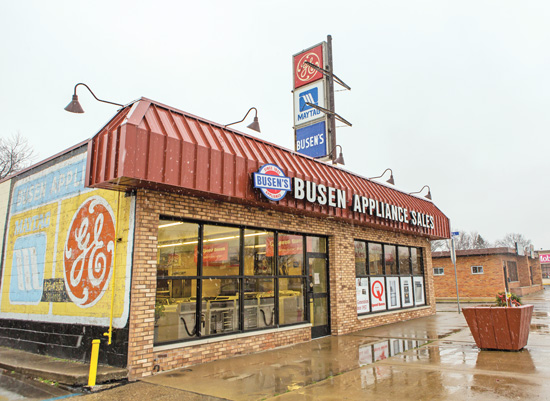 Busen’s Appliance is a family owned eighty-four-year-old tradition, and one-stop shop for appliances, service, and parts that brings with it great customer service.

Busen’s Appliance was opened in 1937 by Earl Schiedel, and at the time was named Schiedel’s Appliance. After ten dedicated years in business, Earl decided to retire, selling Schiedel’s to his son-in-law Cletus Busen. Cletus, along with his twin brother Clifford, took up the torch, changed the name to what we now know as Busen’s Appliance, and set off decades of prosperous business practices.

In 1972, Clifford’s Son, Mike Busen, joined the business after working three years for Raytheon Corp, deciding that the family business was the right path to take. Keeping up the tradition, Mike’s son Tim joined the business and became co-owner along with his father a mere two years later.

Tim Busen, the current owner, continues this dedication to outstanding customer service even after his father Mike’s passing in July of 2020. Maintaining a business rich in history while upholding a high standard for small family-owned businesses everywhere to emulate.

With a staff of five factory-trained service techs, three well-experienced sales associates, and two excellent delivery drivers on hand six days a week, one can count on Busen’s Appliance.

Carrying all the major brand-named appliances like Speed Queen, which comes with their generous warranty on all their washer/dryers, this is the place to find the right fit for all your appliance needs.

Busen’s has a commitment to service and a bond with their customers which Tim believes is due to the one-on-one professional service people have become accustomed to. This high standard for business, along with help from places like BrandSource to keep prices competitive, allows Busen’s Appliance to be a true front-runner in the market against the big box stores.

This is more than your average appliance store, Busen’s Appliance showcases the highest quality for business that can only be found with generations of hard work and commitment to excellence in customer service. It is safe to say that this family-owned business will continue to bring amazing service to the community for generations to come, and you can find them on the same street they have been on since 1937!

For more information about the products and services Busen’s Appliance offers, please call 313-381-1492 or visit BusensAppliance.com