John Hennessey is the co-owner of Hennessey Engineers, a privately owned civil engineering consulting firm founded by his father, Timothy L. Hennessey, in 1971. Fifty years later, John and his sister, Joan, have maintained the company as its Vice President and CPA, respectively. 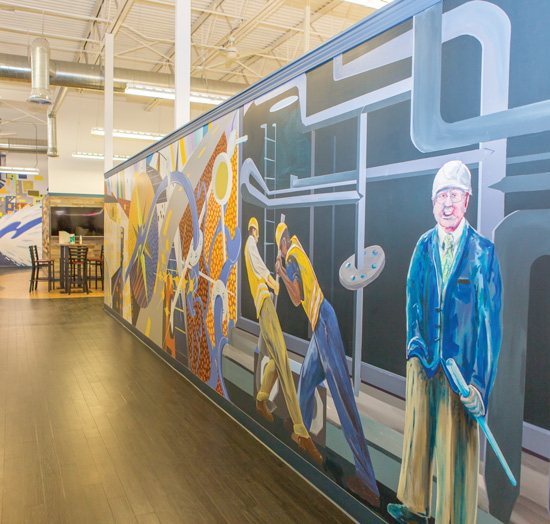 The Grosse Ile residents have used their positions to give back to the Downriver community. They were often doing so through charitable work, like Joan being on the foundation board of directors for both Beaumont Hospital-Southshore and Henry Ford College, she and John running an internship program at Hennessey Engineers for young students, on top of sponsoring different activities in the community. Their most recent charitable act came when they sent the children of their late friend, Rob Chiles, on an all-expense-paid trip to Disney World.

John and Rob’s fathers were best friends, so naturally, the two met around the ages of four or five. Like their parents before them, Rob and John became lifelong friends, even going so far as to join the same industry, with Rob working engaging heavy equipment. Tragically, Rob was killed in a boating accident last August, not long after his wife, Christine, had passed away in September of 2019.

In their wake, many people – friends and family to the Chiles’ – have gone out of their way to help the children recover and ensure that they can continue to live comfortable lives to the best of their ability. Among those friends are John and Joan Hennessey, who, in hopes of giving Christine and Rob’s three children at least a moment’s worth of happiness, treated them to every child’s dream come true: Disney World.

“The children mean everything to Joan and I,” explains John. “Joan and I are there, along with a lot of other people, to really make sure that these kids – although they’ve endured a tragedy like no other that I’m familiar with – we’re there to make sure that these kids grow up and achieve the potential that they deserve to achieve. I can tell you, Joan and I both have the same goals, so that the next time we see Rob and Christine, we can say that we did the best that we could.”

In highlighting that helping the children is much more of a group effort than just a two-person job between him and Joan, John sends a special shout out to the Grosse Ile community for how they’ve collectively continued to carry Rob’s memory in their actions and when it comes to helping the children. “The Downriver community has shown what they’re really about in the wake of the tragedy of losing Rob, someone who was larger than life for Downriver, and I can tell you that’s what makes it a special place to live. [Joan and I] are both grateful we’re part of this community.”

John adds, “The greatest thing about the Downriver community is the sense of being a true community. When you have tough times in life, the community is there to pick you up, and it’s a true village. It’s really a remarkable attribute that you don’t see in other communities throughout the Metropolitan Detroit area. It’s a really special place.”

When it comes to lending a helping hand, John’s goals towards business entwine with the goals he and his team share outside of the workplace. “Our goal is to improve the quality of life for the communities we work in.”